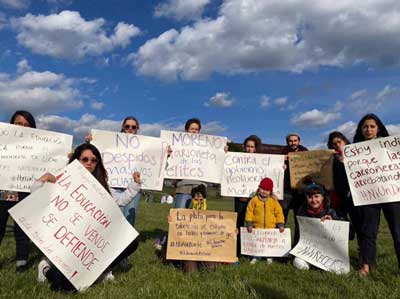 This crisis must be paid by those who cause it and enjoy it, not the poorest!

Due to the constant anti-popular measures taken by Lenín Moreno and his cabinet, Ecuadorian migrants from several locations denounce the new budget cut against the public education[1]in Ecuador in the middle of this health crisis[2]. We are outraged and hereby condemn that the government has cut back 300 million dollars behind closed doors to the Ministry of Education, since the beginning of his government. Causing nationwide mass dismissal of teachers and public employees, as well as the suspension of funding for Literacy project and the elimination of International high school diploma in 77 educational units on the Coast region. The new reduction, which adds up to those made in previous years, causes the impossibility of a new enrolment period at several universities in the country, as well as career closures and the ending of scholarships.

This leaves the most vulnerable sectors with no options or opportunities. These measures only benefit the country’s upper classes, who can afford paying the indecent costs of private universities. The attack on public education is symptomatic of this neoliberal government that responds to the interests of the elites and therefore attacks the rights and dreams of the people, particularly the young. We denounce to the world this offensive against public education. We emphasize the fact that it violates the constitution, and we condemn the obvious compliance with the anti-people adjustment measures imposed by the International Monetary Fund[3]under credit agreements. We also support the call for the impeachment of the Finance Minister, Richard Martinez, for non-compliance with the Higher Education Act and violation of the Constitution.

In contrast to state spending and subsidies programs, which are driven by countless countries to respond to this pandemic, Moreno’s government is cowardly choosing to prioritize public spending in the purchase of «non-lethal» weapons used to impose its regime of repression , not being enough the government hides his newest modern slavery policy behind the bad-called Humanitarian Law, while it tries to hold the working class and the more precarious responsible of the economic crisis that their austerity policies have accentuated during the last years, and that now illustrates the poor management of this health crisis. While this corrupt government and its allies are trying to discredit public investment by referring to it as «inefficient spending», we are not let deluded and will continue to fight against authoritarian neoliberalism as we demonstrated in the streets in October 2019.

Even though we are far away, migrants are present and accompany national events closely; we organize and demonstrate from everywhere. We admire the courage and express our strong and full support to the series of public demonstrations in defense of public education, organized by various popular sectors of Ecuador. We will be vigilant in ensuring that the people’s right to freedom of expression and resistance is respected and that the rights of social fighters in the country are not violated for any reason. Finally, we ask the international community to be vigilant with us, express solidarity and to denounce the neoliberal vortex with which the corrupt and unconstitutional government has been managing this crisis, worsening it and deepening inequalities in an even more rapid way. Today these are expressed in devastating scenes lived by sectors historically marginalized in our society.

We will fight for public education in Ecuador and the world from all corners!